After the brain surgery…

The neurological observations were taken every hour for the twenty four hours following my cranial biopsy surgery. I tried my hardest to keep focused and to ‘pass’. After all, it was my first ‘mid-semester exam’ (a little joke as it’s that time at university and I was having a pretty serious test). My sight and face got a bit ‘tic-ish’ in parts, but it was more suspected to be due to my trying to watch a DVD at 4pm, combined with my lack of sleep and the whole ‘brain-surgery-thing’.

I wasn’t stressed and neither were the nurses or doctors.

I tried to spark cheerful, reciprocal yet brief conversations with each nurse or doctor who visited my room. If they were looking at a bag of my urine and shining bright lights deep into my eyes every hour, the least I could do was enquire about some of their interests, work, or even just let them know how much I appreciate them keeping my alive and as comfortable as possible.One beautiful trainee nurse even gave me a sponge bath. It was as respectful as possible, given the circumstances, and more than I could have expected.

I could bless her a thousand times over.

I wasn’t allowed to sleep in the morning, but they did let me have a simple meal. I couldn’t manage much but the biggest blessing was to be sitting upright as I ate it. It was easier to take in fluids by mid morning when the neurologist came to visit me. He quickly confirmed I was recovering at a rate far exceeding expectations and there was not reason I could go home, if I had carers to take me and watch me for the next 72 hours.

I could have jumped and cheered, if the memory of that such excessive action wasn’t haunting to my mind.

When my parents arrived only a brief while later I was allowed in the shower with Ma to help, provided I stayed in the seat. Even that was a trial in itself. The last phase was to remove the bandages. Apparently I needed to be uncovered for the week before the staples came out. Of course I insisted they be photographed. You have seen these before and due to the somewhat sensitive nature I won’t show them again here.

(Follow this link and scroll to the bottom of the page for the staples wound.)

Only a metre into my first foot journey it became apparent that any such movement would be slow. Over the coming days my energy levels rose and I did speed up but I am not there yet. My head was crusty and sore for four days. I eventually insisted on having Ma wash me in the bath so I could clean my head, so long as we avoided The Stapled Wound. My sleep was always deep, feverish and ended full of pain. It took a few days to work out the mechanics of covering The Stapled Wound with light gauze when I went out during the day. I also needed to tactfully cover it with hats, lest cold air or rain get at me. Or leery eyes.

On the Tuesday I engaged for the first time with My World. I went to work. those two hours in the late afternoon left me disoriented, exhausted and near tears.

On Wednesday I had my first day of university. It was also my first day on foot or without mum. It was hard. It was cold. Once more I was in tears and exhausted.

On Friday the staples came out at 8:20am. It was hard going to get to Sir Charles Gairdner Hospital that early. With me not driving, ma not driving on the freeway and da being home we needed extra travel time for public transport and turtle-paced, disabled me.

By this time my wound itself did not hurt, other than the superficial scalp scab. Apart from the few times I had been sporadically rubbed on my head by an unthinking hand.

Yes, it has happened more times than I’d care to remember.

Yes, each time did leave me crouched over in tears.

The bone still feels sensitive at times, of course. I am just taking it slowly and being careful not to go near ‘risks’. The scab is mostly gone and I am using a scar cream three-times-daily on the whole incision sight for good measure. Since that time I have just been trying to mete out my energy over a wee bit more time each day. Do a little more, stay up a little later, engage in conversations, make a cup of tea for ma or even just sit in the shade outside for a little while. One day I helped take the dogs for a walk, another day Gallowe took me into Fremantle.

Only two hours later and I almost begged him to carry me the three blocks back to his car. I didn’t though.

Do not forget that despite all of this other ongoing recovery, I still have a lesion slowly growing and having an impact on my brain function. I still have losses in concentration, disorientation, unbalanced steps, difficulty seeing straight and occasional visual auras flashing in my left field of vision. Sometimes I cannot speak so well or remember what I am saying. Sometimes the gravity of my situation rushes on me and I forget my presence of self completely as I recall blindness and stroke-induced-paralysis could be just around the heartbeat.

One last mention before I officially label you ‘up-to-date’ and that is that my step-grandfather has been laid to rest. It was a hard day and took a lot out of me. I took over a day to recover from that alone. Another of those ‘head-rubbing incidents’ occurred and basically put an end to my involvement in the memorial service. I was glad for the rest afterwards.

This week we have started to muse about my treatment. I know what it is. I just do not know specifics. You will not be in the dark much longer I promise.

And just simply for those that aren’t up to speed:

I have Systemic Lupus Erythematosus (SLE or Lupus). It was diagnosed 9 years ago, along with my Rheumatoid Arthritis.

My Lupus has been in remission for four years now.

Two years ago I began having small strokes (yes we are back to them being strokes not the assumed Transient Ischemic Attacks or Partial Focal Seizures).

This lead to the discovery of lesions within my right cerebellum. Since then the neuroimmunology team at Royal Perth Hospital has been operating on the assumption I had Lupus-induced Cerebral Vasculitis (Cerebritis).

Numerous strokes-attacks and a wide variety of treatments, all of which have proved ineffectual in reducing or preventing these events has led to a severe need to take stronger action. My eyesight and life were coming into serious question at this point. The next step was to return to the beginning and confirm what the lesion consisted of.

There you have it. This is why, on my father’s birthday, 28th August 2015, I was admitted at Sir Charles Gairdner for a cranial biopsy on the right occipital lobe of my cerebellum.

Getting into Fit with Lupus 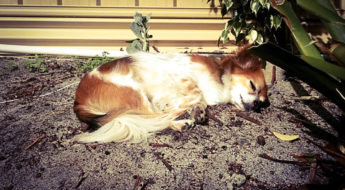