I was diagnosed with Bell’s Palsy only a day after being diagnosed with Rheumatoid Arthritis and a week before being diagnosed with Systemic Lupus Erythematosus. That is not to say they all came about at the same time, or all were as equally concerning for me. To be honest I knew so little about health, even in those days when I had already survived Ross River Virus, Barmah Forest Virus and Idiopathic Thrombocytopenic Purpura.

I have shared the strange circumstances, which were so closely linked for me, that were involved in the subtle revelation of one of the signs of my disease. It was only a few months after that memorable day that my mother and I noticed the other side of my face was behaving oddly too. In fact it became a concern to the point that my mother and I would inquire about both eyes during our visits to the Ophthalmologists, Optometrists and other specialists. Looking back on the numerous consults with different specialists at different surgeries, the amount of money spent on referrals and time spent in waiting rooms or performing dull tests numerous times, well it’s just so darned irritating.

Eventually my mother gave up on my face. Can you believe that? You see the best image we could capture at the time and ask just how badly we had searched for answers but none had come. It wasn’t until I had the pains in my joints and the swelling of my extremities and digits that caused my general doctor (GP) to send me to a rheumatologist for further tests.

My GP had me in to an appointment within the week, but more of that story another time.

My parents were concerned at how fast everything was moving and so insisted my older brother T-Dog go along. I was in the surgery for less than five minutes. It was incredibly brief the time in which the neurologist looked at me, moved me to the bed and took me through my first set of neurological observations. Within mere moments I was informed of my infliction with Bell’s Palsy. It made sense.

I felt a half day of heartbreak as  realised the truth of what had happened to me.

I have felt a strengthening of my tenacity every moment as I look in the mirror. Every night as I don my sleeping mask to protect the eye that never closes. Every time water washes over my face and threatens to break into my unsealed eye. Every time I enter a room with a fan, heating or air conditioning.

Distribution of seventh cranial nerve and effect of paralysis. Image sourced from EmotionalistDiaries.com

Bell’s – Sir Doctor Charles Bell studied the seventh cranial nerve and it’s distributions within the body and cranium 200 years ago.

Palsy – A paralysis or weakening accompanied by involuntary tremors.

The seventh cranial nerve is distributed through the face and soft tissue of the front scalp. There is one for each side of the face and they are isolated from each other, event though they operate in exactly the same way and serve the same functions.The Palsy is an abrupt paralysis or weakening, and is has no indicators of its onset. The sufferer will just wake up with a partial facial palsy. Silvester Stallone is likely the most well-known sufferer of this disease. Image sourced from hubpages.com

What does that mean exactly? It depends on the age, their skin quality and the extent of the palsy. Younger skin is more elastic and in children may not even be noticeable. I know of a girl who had it for months and her mother would tell her off for not smiling properly in public. Mine hit at 18 and so my big glassy eyes became one big glassy eye and one chilled eye. Almost ten years on and half my forehead has big wrinkles, the other half is getting there (it’s broken by a vertical line straight down the middle which is just eerie). I still have eye infections and need to be cautious of wind, air currents and sleeping with an eye mask. I moisten my eye three times daily with prescription preservative free drops from an optometrist and have bandage eye drops for when my eye is having a ‘rough day’.

Bell’s Palsy is not long-term, but you need to be realistic about treatment, management and possible outcomes following any health concerns.

The lazy left eye in my picture is not the Bell’s eye. I went so long undiagnosed, approximately four months, that my left eye began to close harder and deeper to compensate, like a good buddy running alongside to finish the race. My right eye is weak. It does not close. Treatment for Bell’s is a course of Steroids such as Prednisolone. In older sufferers who have lost most of the elasticity in their face they can opt for Botox injections. I cannot say which side or exactly what effect this has, but I have seen those treated with Botox and if I were older I would definitely consider it. For me without treatment and my body trying to right itself I have to simply leave things as they are.

Predominantly Bell’s only impacts one side of the face of a sufferer, although there are rare cases in which is has ‘knocked on both doors’, so to speak. The instance of which side is effected is relatively equal, as is the number of recurrences on each side. There is not predisposition or underlying reason why it effects that side that can currently be proven. Recurrences can happen, I have had one recurrence. Sometimes Bell’s Palsy is explained as a minor stroke-style incident. I cannot speak for that and cannot confirm or deny this. I just know it has been mentioned by some doctors and is a decent insight in to the spectrum of stroke-related-paralysis. 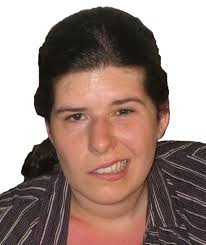 A woman with Bell’s smiling. Image sourced from facialpalsy.org.uk

I have been to a ‘doctor’ who informed me of a belief in some cultures that it is caused by an emotional trauma to the psyche and the side indicates the gender of one who inflicted this trauma. I have inquired after Botox injection therapies and have almost had an operation to have a weight implanted in my eyelid to enable the eye to close. If you are interested in discussing any of these ideas, or my current eye treatments, further please contact me through my contact form, and I will be happy to discuss the matter privately.

I would recommend sufferers, or companions of sufferers of this disease to look at the Bell’s Palsy Information Site for more information.