I am a little skewif (if that is the/a word) on dates and whatnot so please just go with it. This post is intended as a factual recount on what has happened since I left Royal Perth Hospital (RPH) on Monday. I know I told you a plan of what was meant to happen, but since I haven’t spoken since then you will just have to go with it as I cover it in past tense.

Monday I went home with my folks. I pretty much went straight to bed, I get exhausted after hospital stays, antsy but exhausted.

I was aware that the time immediately after my operation would be a difficult time cognitively and one of my biggest concerns was two pending assessments. Each evening I would designate some decent ‘quiet time’ to work on them undisturbed. My submissions were in roughly ten days early and I was satisfied I had completed enough for Pass grades.

Tuesday was a rather eventful day in one blessed respect and to explain I need to share a bit of my old school history first. As a high school student I boarded for years 10, 11 & 12 at Narrogin Residential College. Whilst there I made the two best guy friends I never knew I needed. Shrimp and Dunsty. You may recall Shrimp from my escapades through Europe? I cannot recall much if I have mentioned Dunsty but he has been a regular family icon at big and little events in our household since my high school years. The brother-from-another-mother.

Dunsty and Shrimp both dropped everything when they found out what was going on. Tuesday Dunsty was brought up from his home in Albany by his mother, she was driving here anyway, it is not like he needs her to chaperone…Twig (Dunsty’s Ma) and Dunsty arrived early Tuesday morning to spend time catching up and planning the extent to which mischief can be managed following a brain surgery. Admittedly, you don’t hear that much about it, but I am mischievous and these boys are terrible influences on that part of me.

I began to tire and unfortunately has to ask my two visitors to leave mid-morning.

Low and behold only ten minutes had passed before Shrimp walked in my front door. He had told his boss (he is core manager for a drilling site in a regional Western Australian mine) that he was taking the day off, jumped on an early morning flight (he hates flying) and come in for a day to see me and Dunsty. I felt bad, terrible, worse, for having shunted Dunsty and Twig out the door. Granted I couldn’t have manged that much awesome in my dining room at one time but still. Ma had been at the doctors all morning with T-Dog (my elder brother who had just returned from New Zealand with ear and chest infections) so she had missed the first round of callers but was in time to make a chicken and salad lunch for Shrimp and I.

After lunch it was time for more appointments and so we returned by train to the city. The GPS MRI took longer than the usual ones, but was much of a muchness. I had contrast injections, there were loud noises and shaking bed frames. The music was terrible and I slept through the second half. I always sleep through at least the second half of my MRI’s, yes even with the noise.

On our way back to the train we veered past a few stores to find a nice pyjama top that have a wide, open front and neckline so putting clothes on and off after the operation wouldn’t cause concern. Any excuse for cute clothes (am I right?!) and I can be justified in having a larger range of bedclothes than most.

You can imagine that night I just huddled by the fire under a rug with the puppies.

Wednesday morning at 7am Dunsty and Twig walked back in the door. Twig made me a coffee whilst Dunsty snuggled into bed beside me. Not like that, get your head out of the gutter. He had not even bothered to change out of his pyjamas when they left their hotel. My kinda guy. They talked to us for a bit before Ma came in, insisted it was time we left for my preoperative appointments and my darling visitors left for a funeral. It was an adventure as we tried to work out how to get to Sir Charles Gairdner Hospital (Charlie’s) on public transport. I was slow going. I always am these days. We saw anaesthetists, nurses, surgeons and neurologists. I gave urine and blood samples. I wrote many questions, and the answers to ever more previously noted questions. I took down information in triplicate, signed my life away (pretty much a literal interpretation of some of the documents) and sat in the same chair wondering why I was SO BORED. Ok so I knew the answer to that.

Ma got so incredibly fidgety, which was fine. She can behave however she wants.

Lunch was a late affair at Lambrettas on Hampden Street in Nedlands. Wonderful! As Italian as passata and marinated olives. I tried to negotiate with Ma how she would get Pa to eat there for his birthday as they awaited me to come out of surgery. I took a call not long after informing me to be at the hospital by 11am for an afternoon operation. By the time the buses and trains had taken us home I had taken a rescheduling appointment and would now be on the morning list. Attendance at 8am, overnight stay. Please only bring medications, list of medications, and toiletries.

It was all starting to become real to me now and so I was extremely grateful for my Thursday appointment with Elvis. This darling man managed to nail me in a simple analogy.

Gliding gracefully on the still waters.

Catching the eyes of viewers.

Floating peacefully by at my leisure.

The wind softly blows my feathers but I cannot be disturbed.

Little do they see the panic below the surface.

The reeds I get caught in.

The dirtiness below the surface.

My Hip sent me a glorious message to let me know a new baby had been born. The housemate who so successfully aided me in the theft of a precious book last year. Annabel. Another new family starts their journey. I knew this meant me surgery would be okay. I need to meet this cherub.

We woke after 6am on Friday. We were fifteen minutes early into the Day Of Surgery Admissions (DOSA) reception. I was second on the list. 11am was the expected time. I was very calm and slept most of the waiting time on my hospital bed in my gown. At 10:30 I said goodbye to my folks and told them I’d see them later. Then the bed rolled to the theatre.

I discovered the joys of Oxygen. I experienced the intoxication of this pure air. I woke three hours later numb. It didn’t take long for the pain to come. It was fierce. On some level I wished I hadn’t woken, just because of the pain.

They asked if it hurt. They gave me opiates. I wished I could stay on them forever.

The pain returned. More opiates. I thanked God for poppies.

I could have cried. I needed a litre.

It hurt. Why did I have to wake up for this?

I actually felt more clear headed than I had ion the last month. Except for the pain.

God exists. I know this because he hated me for waking and for denying Him so long. This was his punishment.

I ignored Him. I pretended there had never been brain surgery. I showed Him that I was God. I was the most amazing person to ever recover from surgery. Ever. I wanted my surgeons to know that I had this in the bag. I needed to be let out of hospital Saturday. Tomorrow. I needed to see my Gallowe. I needed to see my parents. I hated that I had put them through this, Dad especially one his birthday and only days after he lost a great man who had been so great to my grandmother, his mother. I needed to get at least 74% on my next assignment, I needed to be back at university on Wednesday.

I remembered most of all that only recently I had been a drone walking around this city without feeling. Without a care for how my body reacted, whether the Lupus would take me and whether I would have another stroke. I remembered all this because blow it all to hell if I would ever give up again. I was ashamed. I was appalled. I was NEVER going to give up again.

Brain surgery? I got that shit in the bag!

Your Existence is a Thermodynamic Miracle 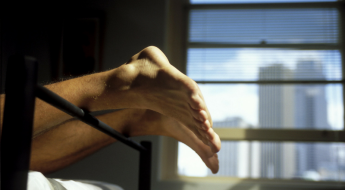 Not Coping on Steroids