Frequent Flyer at the ED

Just quietly, last weekend was uncomfortably full of various activities. Not only did I say goodbye to my darling Polly, but I also had my father visiting whilst he attended a work function and Gallowe and I had two first’s as a couple. I witnessed for the first time one of Gallowe’s football games and in the early hours of Sunday morning he had his first ‘real boyfriend’ duty by taking me to the hospital.

Don’t get me wrong, this was quickly followed up by comforting me through my loss of my cat.

But for all the conversations we have had about my health. For all the stories my parents, brothers and I have shared with him. For all the posts on this site he has read, as well as all the documentation in the Lupus book I have loaned him (seen below). For all of the evidence that has been put to Gallowe about the unpredictable nature of my illnesses, I still wondered if he took it all sincerely and seriously.

It all started just before 3am in the morning. I woke up to an uncomfortable feeling in my lower abdomen. I deciding I needed to go to the toilet (number 1’s). After a while of nothing happening I gave it in and went back to bed. Only minutes later a severe pain replaced the discomfort.

The pain was directly between my pelvic bones at the front. (This is the anterior lower abdomen/ pelvic region)

Within ten minutes the pain reached somewhere between 8 and 9. To put this in perspective I live in a constant pain at a level of 3-4. 0 is nothing and 10 is likely to cause a person to pass out. I was unable to speak or move at times, my body became feverish in those ten minutes with hot flushes and sweating almost unbearable in itself. I was hard enough for me to climb off the toilet and reach the door to call Gallowe awake.

As I mentioned, I live in pain. It’s just what happens when your body is so consistently self deprecating. I know how to identify regular pain, irregular but not unusual pain and irregular, unusual and concerning pain (Bad Pain). Bad Pain is the type that comes on quickly or is constant, consistent and acute for an extended period of time. Bad Pain is unrelenting. Bad pain is in a part of the body that cannot be easily explained or identified. This pain was Bad Pain. I knew that because it was near instantaneous. It was acute and of such a high severity. It was in an unusual part of my body.

My sleep garbled mind awoke swiftly and with clarity distinguished every possible reason for pain localised and isolated in this way.

I went back in to the toilet but after ten minutes there was still no change and the pain was constant. I considered a heat pack but the thought of more heat on my body was nauseating.

I woke Gallowe and told him to take me to hospital. The worst case scenario is they could give me stronger and more effective drugs than I have at home. I had taken some high strength Paracetamol and they had no helped.

In the time it took me to pack and my hospital bag (I have one of these yes) and get my phone and wallet Gallowe was barely dressed or ready. I waited for him (bless the boy, he will get better at it) and then we left for Fiona Stanley Hospital.

Gee it’s really handy being only 3 kilometres from a brand new hospital!

I whimpered and sobbed and held my feet so my legs stayed cramped to my belly in the hopes of alleviating the pain until we made it to the Emergency Department. When we were there I was quickly seen to a bed and prompted into one of those gorgeous blue gowns.

The morning after the night before. I was in hospital for 20 hours in the end. I do not have a food allergy. I do not have kidney stones. I do take a form of chemotherapy. I do have a slightly swollen right side of face. I do need to have more tests done. I should never take phenergan again. I have recovered now. I am a fighter. I am invincible. #Lupus #lupusawareness #lupuslife #chronicillness #chronicallyill #positive #hospital #FionaStanleyHospital #healing #health

I was lying there on and off for the next three hours. Gallowe moved an uncomfortable seat next to my bed and complained about being tired and cold whilst rubbing my hand for comfort. A nurse and doctor ultrasound scanned my stomach and confirmed I wasn’t blocked or ruptured in anyway or any place. I also wasn’t highly pregnant and had no kidney stones. It was nice to have these reconfirmed, even though they didn’t help me so much.

I spent a long time trying to provide a urine sample. Finally, from that the doctor and nurse were able to confirm that I definitely was not pregnant and did not have a urinary tract infection.

These results were all details that had been confirmed a week previously by my doctors and the ultrasound specialists, but it was a relief to know that they were not the cause of my incredible pain. I also did not have any ruptures or blockages. The only reason that could be found was spasmodic bowel cramping.

By the time we left the hospital the sun was starting to make beautiful colours over the Armadale Hills. Polly was pleased to see us return safe and sound. We fell asleep almost instantly and tried to recover what we could of the night’s rest. All I had needed was time for the pain to pass and high strength Buscopan with my Panadol. All I can think is that I hope I do not have these pains again.

I’m sorry it has taken me a week to tell you I have been to hospital again. 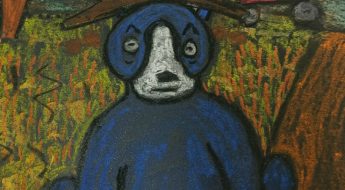 Ask Me How I'm Feeling