Moving fast and sure

Today I had a visitor. A close old friend from school. Shrimp.
He came over to fulfill a promise he’d made me a while ago. We were going for a motorbike ride. You see about a year ago Shrimp finally got his road bike license. He’d been going for it for ages but every time he went for the test he failed due to the testers being biased against him. One time it was the weather though. To be fair.
So he has his license and I’d finally worked up the courage to know I could get on a motorbike about 6 months ago.
3 months ago I asked him if I could go for a ride with him.
3 weeks ago we finally got around to organising a day.
Today it was cold. Freezing. For Perth anyway. Chance of rain around evening.
I wore my black leather jacket. The one I had sporadically bought in Fremantle two years ago when I was in a phase where I really wanted to own a moped. Too afraid to ride on one certainly, but wanting one all the same.
Shrimp offered me gloves but I declined. I doubted I would need them and they would make it harder to hold on. I held on to him, of course, not the bike. It wasn’t until I sat on the bike I realised I had no idea what I was doing.
We didn’t go fast. Or do anything silly. We didn’t go far from home. Or on to any of the major highways.
I still got a mad rush of adrenaline. Not like when you jump off a building. Not like being in an upside-down plane. But enough to make me feel happier than I have in weeks.
The ride was just what I had expected and imagined and needed. There was one somewhat negative thing I have to admit about the ride…
I should’ve worn the gloves! Brrrrr!! 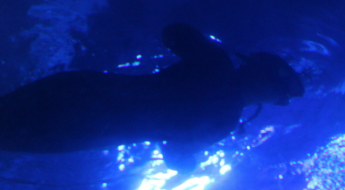