I have been awash these recent months with a new symptoms. To be honest you have not heard so much of it, not near as much as it has consumed me. This is a common occurrence in people with chronic illness. It is not so much that I was holding this close to my chest, or trying to cope with my issues internally, but more like I just got so tired of complaining every day and talking about something that was already occupying too much of my attention and energy.

What am I talking about? You may indeed wonder and so I will recap.

I've had another allergic reaction this morning. It has been almost a year since the last time this happened. For the past few days my skin has been irritated on my arms and legs. The irritation is constant but minor, easy to ignore. This morning I awoke to it. It wasn't too long before i was crying in a cold shower, waiting for the #Fexofenadine to work. An hour later it was clearly not going to be enough to I rushed to my #pharmacy, hoping desparately that my old script for #Endep was still valid. It was. Now I am in a tepid #Pinetarsol #bath until the #antihistamines work and I don't feel awash with fire ants. I'm listening to #Rudimentals and reading #AThousandSplendidSuns by #KhaleedHosseini ❤ #SLE #ThisLupusLife #lupuslife #coping #health #rest #survivor

I cannot recall exactly when this arose, perhaps the start of April? I feel safe in this estimate and so I will stick to that timeline.

It all began as an occasional event in my life. During the day at some point I would experience a subtle irritation on my skin. The skin of my legs for the most part, and more often the lower half. It would rise in intensity and coverage within a matter of fifteen minutes. The events had no visible presentation, which means there was nothing to see. The skin was not dry or flaky to begin with. It did not swell, develop redness or lumps, there were no external excretions and no residual marking. To itch these irritation sites caused no relief and did not appear to lead to a spreading. To ignore the itch did nothing either, not in the way of preventing length of irritant or the severity of the itch.

There did not seem to be any concrete evidence as to what brought on these bouts of irritation. There had been no change to washing detergent or body cleaners, there were no new clothing or linens. The weather hadn’t altered significantly, there were no unusual pollutants in the air. Nothing in my body functions gave any indications as to what was occurring either. I was not changing medications or diets. Indeed I stopped cleaning my bathroom, changing clothes too often, underwent periods of not cleaning parts of my body or using anything at all on my skin. I must assure you, I did not risk my hygiene for the sake of this irritant, regardless of how severe the events were.

We removed many items from my life and over the two months I dwindled into wearing only one jumper, two pairs of jeans and a handful of shirts. This wasn’t because they didn’t induce the irritation but they were comfortable to wear during an episode.

Today was my first 'working' day with #AustralianIndigenousMentoringExperience or #AIME. This organisation works with #Indigenous #Australian students in high school to build the #confidence and skills they need to succeed. Absolutely one of the most enjoying experiences I've had this year and a #volunteering role I would recommend to anyone! I can't wait for the next day #murdochuniversity hosts! #dosomethinggood #mentor

During a sequence of doctor appointments my doctor lead me through Amitriptyline, an antihistamine with benefits for skin allergies, and Loratadine, an antihistamine without a calmative side effect. I lived on these two in turn for weeks. Yet the occurrences grew ever more frequent and the extent of the irritation in site, longevity and severity increased ever more until I was exceeding recommended dosage daily and still finding no relief.

The only respite I found during these two months were bleak hour long sessions I spent with the body parts in questions submerged in the icy cold waters of our backyard, unheated pool. It was excruciating.

Why? You may well ask this. The temperature of the pool was somewhere in the low teens, given that it was autumn here in Perth. It occurred to me that the colder temperature would close off my pores and prevent the inflammation or reduce its effects. As the days grew colder so too did the water. I found that it hurt. A lot. But while it hurt I didn’t feel the fire on my skin. The metaphorical ants eating away at my flesh. Yes, the freezing pool was preferable to the itch. I would submerge for an hour then air dry in the ‘sun’. If the itch was still there when blood returned feeling and sensation to my limbs then I would submerge for a second hour. Purple toes and white flesh. It was not attractive but it was an answer.

This is where I spent my week break before exams began. Not studying. Not refreshing my mind. Not even sleeping. Just crying and soaking my body in freezing cold water. By mid week of that week I was on the phone to mum and she had organised an emergency appointment with my doctor Evs. Evs was brilliant but clueless. There was nothing she could think of. She felt my lymphnodes, my stomach and a few other things. She ordered tests and promised me that if I went home she would contact me with an answer as soon as she could get some ideas together. If not she took my exam dates down in case I needed sick notes for missing them.

My #cold is mildly better today. The minimum temperature this last week was between 4 & 12 degrees celsius. The maximum was approximately 20 degrees. I have been rugged up and drinking my '#lemonteadrink'. With all of this going on I was really hoping the #skinflares would disappear for a little while. I was wrong. So here I sick, fighting back tears and hoping the #antihistamines kick in before I leave for work. The water is 4 degrees-how is that possible?! #lupus #unknown

I was not home at 6pm that night when she came to visit. I was at work, which is why she had reached my answering machine when she called. With my housemate she left instructions, some specific tests and two prescriptions. One was a dermatology cream that should work. The other was Prednisolone. Something she hoped would work, according to the dermatologists she had been in contact with. And something she knew would work because, well, steroids always seem to work. As much as you know I dislike jumping back on that bandwagon, it was all I could do to wait three days, trialling the cream before I filled the second script.

On the Friday of that same week I was on Fremantle with my friends when I had a seizure. It was just over a year ago that I had my first one and I haven’t had one since then. I was in the best possible hands I could have been in during the event and afterwards. I stayed with my friends as they guiding me through it and sat with me drinking green tea until hours later when I felt well enough to catch the bus home. I held mum at bay until Sunday, when she raced up to visit for a night. She made soup and helped me around the house to feel calm before I started exams. She helped guide me through introducing Gallow to the darker side of my illness and gave me the strength and confidence to finish my last few days of the semester at university.

Now I am resting at home. I have given myself this week to stay in pajamas until lunch, drink coffee and read. Next week I will need to get dressed, have breakfast and do chores out of the house. I will need to make a semblance of a life to keep my mind on task. But to be honest. I don’t really care. I don’t itch and for now that is all I really care about. Tomorrow I am going back to Evs. I will find out if my tests showed anything interesting. I will have an Implanon inserted in my arm, because in the end Mirena scared me too much.

What we do know now is that it isn’t a skin irritation, it is hormonal or chemical or something inside my body. It is not eczema, dermatitis or topical. It is not an allergy to anything immediately apparent. Also, my kidney pain is back with the steroids. 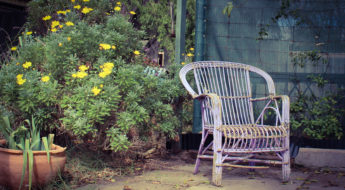 Nobody likes to feel alone